Canadian Guide Dogs for the Blind 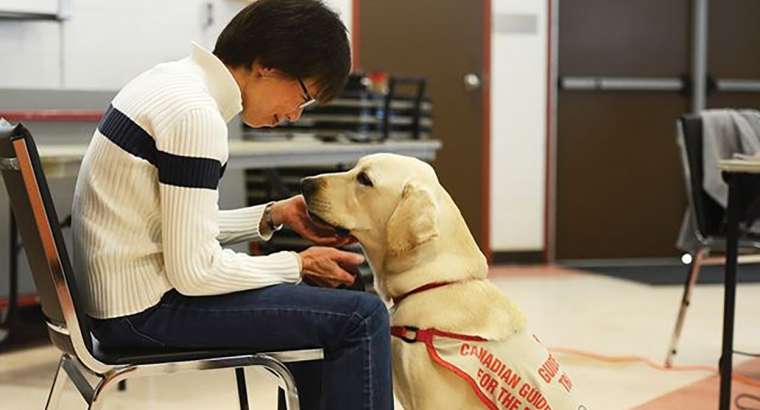 That’s good news as Vegas is training to become a guide dog for a visually-impaired person.

While Debra Smith, a volunteer with the Canadian Guide Dogs for the Blind, spoke to about 20 members of the club on Tuesday, Jan. 6, Vegas sat and rolled around with trainer Lina Tsang. Ms. Smith and Ms. Tsang are both ‘puppy walkers,’ volunteers who work with the puppies from seven weeks of age to about 12 to 18 months.

Most guide dogs are either a Labrador retriever or a golden retriever, but poodles are also used for people allergic to dogs.

Each trainer receives a care manual and assignments for the first month, Ms. Smith said.

“There’s protocol to follow. There are rules to follow so it’s not overwhelming for the dog. In the first few days, we get to know our puppies.”

Puppies eat four meals a day at the beginning, but they are “whistle trained,” meaning they have to wait until a whistle is blown before they start to eat. It teaches the puppies patience, Ms. Smith noted, adding all the food and veterinarian costs are covered.

She noted, “Puppies like to play,” so supervision is “very important. Those of you who had dogs know how they get into everything.”

The puppies are put on a leash early on, she noted.

After the puppy gets its shots at 13 to 14 weeks, then they can be taken out to places.

“Puppies are always on a leash when they’re outside the house,” Ms. Smith said.

The dogs are also trained on when to do their business, she noted. That way, they only go when they are told.

“Usually, it’s on a schedule,” she said.

A previous dog Ms. Smith had, Walker, “was a very keen student. He loved to learn.”

Training a puppy isn’t “all work and it’s not all learning. A person who has the dog spends most of the time loafing.”

She noted Walker “liked to help in the garden” and that meant digging holes.

“If I ignored the garden, so will he. The weeds did well that year.”

Teaching the puppies is “a gradual process so the dogs aren’t overwhelmed and we aren’t either,” she noted.

Once a dog learns a skill, such as sitting when told, the trainer will try to teach the dog the same skill in an unfamiliar setting, such as in a store or restaurant.

Ms. Smith also had a dog named Gilbert, which she took to work.

“He wasn’t sure about this work thing. He eventually grew into his coat (the covering letting people know the dog is being trained) and his job. The coat means they are working and they have to focus.”

Ms. Smith added, “Once they are trained, they are very sweet, these guys.”

She has a sign at work that said if the dog was wearing the coat, he was working.

“If my co-workers saw he had his coat on, they would walk on by. I had a lot of visitors who came to play with Walker.”

When a dog reaches 12 to 18 months, it is then sent to school in Manotick, a village near Ottawa, for full-time training. The initial trainer usually only gets one week’s notice that the dog will be picked up.

“They do grow up before you know it.”

Some dogs are found to be unsuitable for being a guide or service dog. It could be because of temperament or a physical issue.

“It that happens, the dogs are found a home. There’s a long list of people who want to adopt them.”

A guide dog will “work as long as it wants to.”

It could happen that one day a dog will decide “you know what, I don’t want to work anymore” and they are retired.